Alternatives to the Standard IQ Test 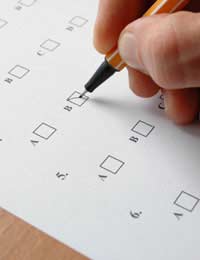 One of the most debated topics about intelligence is how to measure it. While many establishments and organisations have accepted the ‘Intelligence Quotient’ test as the standard method of determining levels of intelligence, there have also been many criticisms and reservations.

Therefore, a number of alternative tests to measure intelligence have been proposed, which try to avoid any biases in the form of testing by including equal elements of logical reasoning, problem-solving, adaptation and critical thinking.

The IQ test was developed by two French scientist, Alfred Binet and Theodore Simon, originally for the purposes of assessing children at school so that mentally-handicapped children or children with behavioural problems could receive adequate and appropriate education.

This initial test measured skills such as comprehension, judgement, problem-solving and reasoning – and is the basis of the standard modern intelligence test.

The original test was subsequently modified for adults at Stanford University in the United States, with the new version being named the Stanford-Binet test and the score it produces called the now famous “intelligence quotient” or IQ.

This test was further modified into the Wechsler Adult Intelligence Scale, which is based on statistical distribution of IQ scores within a population, rather than the old concept of “mental age”. In other words, the scores are based on a group of people representative of a wider population and is graded so that the majority of people fall between IQ’s of 90-110. The test measures a range of different abilities including mathematical, verbal, spatial, memory and reasoning.

Criticisms of the Standard Intelligence Tests

Many scientists, psychologists, educators and members of the general public do not believe that the standard IQ test accurately measures intelligence.

They challenge the concept of a ‘general’ intelligence (‘g’) which is universally representative of intelligence levels and measurable by simple verbal and logical skills. They feel that the standard test does not take into account influences from genetics, cultural and social background, even personality of the test-taker.

Critics also feel that there may be serious cultural biases in the development of the standard tests which reduce their validity as a measure of cognitive ability for people of different races.

There is also debate whether intelligence is a fixed quantity that can be measured and whether it actually encompasses a broader conception than what is measured in IQ tests, i.e.. the tests only measure a part of what is commonly understood as “intelligence”. All people have unique strengths and weaknesses in different areas, whereas these tests tend to over-emphasise the general ability, “g”. Finally, several psychologists believe that there are multiple intelligences which cannot be measured.

Standard tests are also often inappropriate for children with mental development problems, such as autism, since the skills measured (e.g.. adaptive) are poor indicators of intelligence in such children and have resulted in the incorrect assumption that most children with autism are mentally retarded.

Given these criticisms, a number of alternative intelligence tests have been proposed. These include:

There are still many who believe that human intelligence is not something that can be easily measured, no matter how many different types of tests are applied. Despite their respective claims, each test often gives a different result and it is difficult, if not impossible, to decide which tests is giving the correct result and which the wrong one. Finally, it is important to remember that all intelligence tests are greatly influenced by the emotions of the person taking the test – in general, if you are relaxed and happy, you will achieve much better results than if you are tense and anxious.

Brain Mapping Your Intelligence
Share Your Story, Join the Discussion or Seek Advice..
The problem with intelligence is not only about how smart you are but also about your ability to utilise your intelligence. The question comes up why are the people with the highest IQ not the richest? Why are they not ruling the world? why are all of them not the most successfull? Maybe it is because they do not use their intelligence to its full potential. What rather needs to be tested is 'applied intelligence'. The ability to solve problems/acheive goals in order to survive modern demands, by applying intelligence (mental ability) according to the complexity of the problem. What needs to come into play here are working memory, creativity, mental resourcefulness. The testee should be given a goal to achieve, and 'tools' which is unfamiliar to the testee. The test should be measured using time and complexity. The testee needs to use working memory to learn and remember what the tools do, creativity to use the tools in different combinations, and resourcefullness to adapt quicker to achieve the goal in a shorter time. Does this make sense? That is just my opinion
Pappy - 12-Oct-14 @ 9:54 PM
so informative information is given thanq so much
chinna - 1-May-12 @ 6:11 PM
Title:
(never shown)
Firstname:
(never shown)
Surname:
(never shown)
Email:
(never shown)
Nickname:
(shown)
Comment:
Validate: