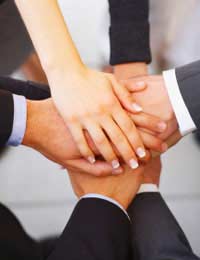 There are many studies and initiatives for improving a person’s intelligence. Some people may want to enhance their memory or focus specifically on certain skills such as their maths skills. For many, however, they want to know more general ways to improve intelligence. They may not be interested in targeted learning through a computer programme or an intensive training course.

Using Teamwork for Intelligence and Other Benefits

Investigating the Connection Between Emotional Intelligence and Teamwork

The successful team showed strong motivation to complete the project to a high degree of quality. Rather than be concerned with personal issues, they approached problems in a healthy, transparent way. They showed important characteristics of positive relationships and collaboration.

In contrast, the unsuccessful team showed very poor communication and collaboration. Members were not considerate of one another and did not approach the team in a positive, effective manner. They also demonstrated a significant lack of empathy to other team members.

A Positive Cycle of Teamwork and Intelligence

The results of this recent study give a strong suggestion that further research should be performed to focus on developing emotional intelligence. Researchers believe it would be helpful to develop an instrument to evaluate the emotional intelligence of students or professionals at the start of a project or a term. Then, those students who score low on emotional intelligence could be trained on new, useful strategies to support them in becoming better team players.

Improved Teamwork and Success at University or Work

The result was that their teamwork and delivery of projects would be significantly enhanced. To apply these strategies may require a tutor in university or perhaps a trained professional in the workforce who can lead the assessment process. They would be responsible for training the person and also monitoring and later evaluating the changes in their team performance and project delivery.

How Else Does Teamwork Benefit People?

There is growing evidence to show that amongst all the many valued skills such as communication and problem-solving, an increasing number of employers are looking to hire people with strong teamwork skills. Collaboration as a skill is becoming more valued in many sectors, from finance to healthcare. This suggests that teamwork skills are important to learn not only for improved intelligence and performance but to specifically show potential employers capabilities in collaboration as well.

The study is strong evidence that emotional intelligence is connected with a person’s ability to work well with others in a team. Any area of life from work to personal situations can benefit from this improved ability to collaborate. Hopefully we will have new tools in the future to better identify those individuals who need teamwork and collaboration skills training, which can then enhance their intelligence for even better performance in future team projects.
Next Page