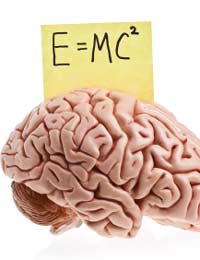 While intelligence is something most people seem to want to increase, we also sometimes see very high intelligence as something unattainable and even strange. The perception of a genius being eccentric and perhaps having weird ideas is a popular one.

While there are many intelligent people and this doesn’t mean their intelligence is equivalent to Einstein, for instance, there is still some truth to the belief that intelligent people could have more unusual ideas. A recent study investigated just that – and found that more intelligent people have a higher likelihood of showing social values and even religious and political tastes that don’t fit with the rest of society.

The concept of evolutionary novel ideas refers to a preference or value that a person has, which is not one they are meant to have – biologically-speaking. The views are different than the ones our ancestors would probably have held. In comparison, the preferences and values that ancestors had for millions of years would be referred to as evolutionarily familiar.

Intelligence and Differences in Personal Preferences

If you think about intelligence in basic terms, it encompasses your ability to think and also to reason in ways that allow you to problem-solve. This kind of intelligence helped our ancestors by giving them an advantage in solving evolutionary novel challenges that they didn’t have obvious solutions for to solve them. The consequence is that the people of higher intelligence are more likely to be able to recognise and handle these challenges compared to those who aren’t as intelligent.

Previous studies in this area of intelligence showed that those of higher intelligence tended to be more nocturnal. This meant that they would wake up and stay awake later than people of lower intelligence. Our ancestors didn’t have the artificial light we have, which meant they would typically awaken just before dawn and then go to bed just after dusk. To be nocturnal is therefore considered evolutionary novel.

Liberalism is a Novel Idea

Liberal views would be considered a novel idea and are associated with people of higher intelligence. In this recent study, it is suggested that from an evolutionary standpoint, we are designed such that we are conservative and care mostly just about our friends and family – those close to us. To have liberal views and care about strangers is therefore an evolutionary novel idea. It means that an intelligent child would be more likely to become a liberal adult.

Differences in the IQ of Adults

If we look to the evidence to support the suggestions of researchers, the concept is validated. Adults who considered themselves to be very liberal had an IQ, on average, of 106. In contrast, those who identified themselves as very conservative had an IQ eleven points below that.

Researchers also linked the ‘unusual’ views of atheism with higher intelligence. Religion serves many purposes for people, but our ancestors were evolutionarily designed to experience paranoia and hold strong religious beliefs in part, as a result of that paranoia. This helped them to protect and serve their families to prevent them from being afflicted by danger. Children of higher intelligence would thus have a higher likelihood of growing up with perceptions that contrasted, where they would not believe in God and would instead be an atheist.

The results relating to intelligence and sexual exclusivity were also interesting ones. Historically-speaking in evolution, people have been somewhat polygamous. Those men in polygamous marriages were not held to a standard where they should be exclusive to their partner while monogamous ones were held to this standard. Women, however, were expected to be sexually exclusive regardless of whether they were in a monogamous or polygamous relationship. In this sense, being sexually exclusive is considered an evolutionary novel idea for men but not so for women.

The links between intelligence and perceptions clearly have strong evolutionary roots. It would be particularly interesting to learn about more of these novel ideas and how intelligence connects to the many ways in which humans think and act.
Next Page