Home > Interesting Questions > Are You Born Intelligent or Does It Develop Socially?

Are You Born Intelligent or Does It Develop Socially? 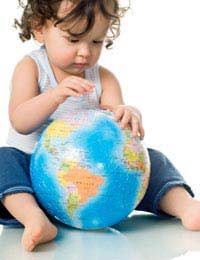 Despite what many people think, your social environment can also play an important role in the development of your intelligence. Geniuses aren’t only born – they can be made too. Certainly, you are born with a certain amount of intelligence and you may never achieve the intellectual abilities of someone else born with a different set of genes but equally, poor social nurturing can mean that you may never full realise the potential in your own genes.

The Heritability of IQ

It is widely accepted that intelligence is a trait that is passed down through the generations and the degree to which the intelligence quotient (IQ) is dependent on your genetic background has been extensively researched. For example, several traits are known to be primarily genetic, such as adult height or eye colour whereas other traits have low heritability, meaning that they are heavily influenced by the environment – such as depression in men. The way this is measured is by seeing how much a certain trait varies in people with very similar or different genetic and environmental backgrounds. Identical twins raised separated is a common method as any differences can then be attributed to the environment. From these studies, it was shown that IQ has relatively high heritability and that the majority of IQ differences between adults can be explained genetically. Scientists believes that the relevant genes express themselves by affecting an individual’s predisposition to learn, build and develop mental abilities throughout their life.

Thus, it is believed that genetics can account for 75% of your adult intelligence, with the environment being responsible for the remaining 25%. However, what is interesting is that research has found only a few specific genes which have a distinct, substantial effect on IQ – which means that intelligence is probably the result of the action of numerous genes, and their interaction with environmental stimuli, rather than the product of a specific “intelligence gene”. In fact, many believe that as much as 40% of all genes may contribute to overall intelligence.

The Social Development of IQ

Despite the big role that genetic plays in determining intelligence, social and environmental factors can have an important influence too. In fact, research shows that aside from genes and formal education, early family environments also play a crucial role. Evidence shows that a baby’s intelligence is not fully developed at birth but gradually evolves and changes, especially throughout the early elementary school years.

Parents actually a greater impact on their child’s IQ than any other person or institution in the child’s life, including schools and this impact is greatest during infancy and childhood, up to the age of eight or nine, after which parental influence diminishes. Things parents can do to improve their child’s IQ include: maintaining your own education, getting good nutrition and prenatal care, spending as much time with the child as possible, interacting and stimulating his mind through reading, shapes, numbers, colours, etc and exposing the child to experience outside the home.

Certain studies have linked specific activities with improved mental function. For example, one piece of research suggests that musical training can lead to the development of higher brain functions and in particular, better mathematical ability. Music is believed to enhance the brain's ability to visualise and transform objects in space and time, as well as the ‘hard wiring' for spatial-temporal reasoning. Another study showed that babies brought up in a stimulating environment (starting from in the womb) were more dynamic, alert and curious, with good hand-eye coordination and high social skills.

Keeping up the Challenge

Many researchers believe that human and animal brains remain “plastic” throughout their lifetimes, with a great capacity to change. This means that our brains remain strongly influenced by environmental conditions. In fact, studies have shown that stimulating environments increase brain thickness, the number of neurons in the brain and the number of connections between these neurons. In addition, putting the test subject back in a boring environment produced a decrease in responses by as much as 60% within a week. All this supports the advice to continually stimulate your brain throughout your life, even after reaching adulthood, and to promote the development of a broad range of interest and skills which are mental, physical, aesthetic, social and emotional.

Smarter Kids from Active Mums?
Share Your Story, Join the Discussion or Seek Advice..
[Add a Comment]
i think children are born with a certain amount of intelligence, hence the environment has a major role to play. I always got an average mark in mathematics but with other subjects like science, English and others got higher marks. i wonder whether the genes i inherited had a role to play on this matter.
koenza - 14-Aug-19 @ 6:43 AM
I am a very average bright funny out going human being who is 60 and really I do not understand what the big deal is except I am uneducated. And not like the guy from Boston. Whom I admire no I get tagged with phenomenon to what I do not know but it is from reputation of falsehood. What a pain in the butt. The doctors cone the head hunters come the telapath and mind reading asscoication shows up for what a test they suck then the FBI is called by me horrible thing to do they all can talk I said now wait I wasn't like this at 5 and this has got to be cops and families with a judge and magistrate court and I am not in trouble thank God. I love me I like how I am and so not need all of this intelligence help that I am getting also my neck is broken it would not be an opportunity for any of these things my friends did this to let me know how stupid I was over a lot of things they never think about abuse at its finest thanks for the vent Rhonda Laine of Pinellas County Florida and yes I drink sometimes I wonder why
Rhon - 12-Jun-19 @ 10:50 AM
I feel disappointed that I haven't done so well in life, I have had to resit GCSE exams. I have tried to resit GCSE maths 3 times at night school, but all I got was an E grade, I tried to do a numeracy class at night school, but still could not pass the exam. People who are born intelligent don't know how lucky they are, they will go on to get good jobs and fit into society. I always feel like on the edge of society. Another problem is trying to progress at work, through hard work and commitment, it doesn't work, managers like who they like and progress the careers of people that they like. Iam now thinking of re-learning maths again, and working a bit harder. When I read about intelligence being inherited, I thinkI am in a losing race, to begin with, what chance do I have. Also, the people who are intelligent are also very good looking as well. I've got bad genes and not no hope at all.
Mua - 1-Oct-17 @ 8:31 PM
for me I think gens and environments has a great roll to play in some one intelligency but but the force in his or training matter s the most
Cofrancis Art - 8-May-17 @ 10:24 PM
I strongly believe until proven otherwise that everything is acquired in terms of knowledge(intelligence) through experience somehow.you just can't know something you must have picked it unconsciously.
Tobe - 2-May-17 @ 11:31 PM
I believe intelligence has to do with genetics at large. Though the social influence is also an important factor. Most people are already intelligent from birth but might not have the ability to act as such but with the help of the environment and social influences they will discover their potentials and begin to act as such. Some individuals also need not the environment before they start acting. You see that most kids pick things at a go. They just wait for others to do things just once and they would copy it right forever. On this note I say that intelligence depends mostly on the genes even though the social/environmental factors also plays crucial roles. If a child is being born of parents who are not smart, of course that child needs a good environment to build up because he/she already exhibits most traits of the parents.
Prince Kuro - 12-Mar-17 @ 1:32 PM
does allbornwithintelligence
D - 18-May-16 @ 12:29 AM
for me I think gens and environments has a great roll to play in some one intelligency but but the force in his or training matter s the most
chukalofun - 2-Aug-14 @ 9:33 PM
I think It is not god gifted
smarte - 9-Mar-13 @ 7:20 AM
Well, I have always been one of the fastest thinkers in my class, but perhaps I have to work more on my memory skills. Does the IQ include that? In my opinion, intelligence is developed throughout an individual's life... for instance, I don't believe in such thing as "gifted" maybe other people are just absent minded and have to work harder on their concentration. If you really want something, you have to work hard for it, such as a higher thinking functionality. When I was a child I was one of the kids that got bad grades, but now that I am a high -school student I have found how easy it is to comprehend the diversity of subjects there are. Reading helps A LOT unless you read junk... most teen/pop magazines can be fun, but they will probably not inform you well.
Cookie - 11-Feb-13 @ 4:43 PM
I think if your iq is already within a reasonably close distance to someone else that it may be possible to reach or surpass them by doing certain things that stimulate the brain and have been proven to increase intelligence.
Mister - 30-Dec-12 @ 1:53 PM
If IQ is acquired through birth are you always going to be less intelligent or as smart as someone else born with a higher IQ even if you're more knowledgeable than them?
The Fink - 22-Sep-12 @ 3:19 PM
Title:
(never shown)
Firstname:
(never shown)
Surname:
(never shown)
Email:
(never shown)
Nickname:
(shown)
Comment:
Validate: